The votes were cast by the members of the Thumb Sports Writers Association for the 2010 - 2011 high school boys & girls basketball awards. It was a struggle with some disagreements but the TSA came down with a final list. Pick up your local thumb area newspaper publications for all the in depth information on the top winners selected.
**Special thanks to Steve Jias of In Focus Photography for the pictures taken this year.

Thumb Tailgater Sports conducted some video interviews with the First Team Players. The video interviews are located at the bottom of this post.
**Of note, missing was first team player, Rayenne Kaiser of North Branch. She was very ill and could not make it to the photo shoot. 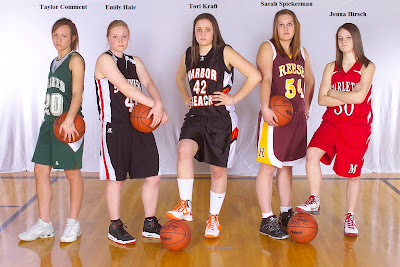