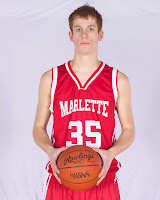 Kyle Hall was a standout athlete from Marlette, Michigan. More notably, he was a kind, modest and humble spirited young man who had just graduated high school and was about to display his talent in basketball at Alma College. Kyle was also part of the 2010-2011 first team high school boys basketball all star team of the Thumb Sports Writers Association. He will be dearly missed by all who knew him. Prayers go out to the whole family of Kyle Hall.
Services for Kyle Hall: Visitation on Tuesday, July 19th from 1pm - 9pm at the Marsh Funeral Chapel in Marlette, MI.
Funeral will be Wednesday, July 20th, 1pm at the Marlette Junior-Senior High School Gym.
Posted once again is the video interview Thumb Tailgater Sports did with Kyle Hall during the photo shoot for the 2010-2011 first team all star basketball players. Following that is the great game that Kyle played against Harbor Beach during the regular season that enable the Marlette Red Raiders basketball team clinch the Greater Thumb East Title. We will miss you Kyle...