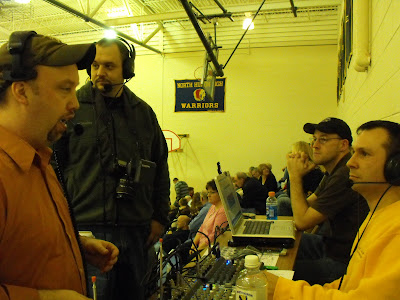 (Left to Right; Paul Adams, Chris Ogryski, Mark & Eddie Fury)
Thumb Tailgater Sports was incarnated many years ago on WLEW Cruise 102.1 FM, as a special pre-game show before either football or basketball games. It started with Eddie Fury, Paul Adams - Sports Writer of the Huron Daily Tribune, and Chris Ogryski - Editor of the Huron County Press, with the show being called the "Thumb Tailgaters Pre-Game Show". We all shared one thing in common and that was a strong passion of the coverage of high school sports.
I am still at a loss and confused on what happened on Thursday night when I was informed that Chris had passed away. It is still setting in for me and will for a long time to come.
Chris Ogryski & Paul Adams are the reasons why I started Thumb Tailgater Sports. When I left WLEW full time about a year ago in September, it was one of the most painful decisions of my life. For the one reason, the show would no longer be on and I would not be able to see, talk and hang out with my "boys". That didn't happen - Chris & Paul stayed in contact with me through that fall and encouraged me to attend some games they were reporting on for their respected publications. 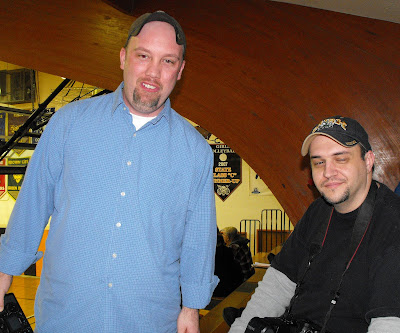 
Later on in the winter sports season, WLEW asked me to come back to work part time and to do play by play for basketball. That opened the door at various times to meet up with Chris & Paul to have a reunion of the "Original Thumb Tailgaters" for some special pre-game shows. Later on with the support of Chris, Paul & WLEW Football Sports Announcer Rick Glaza, I started doing more internet special pre-game podcast shows that later became the idea of doing Live Internet Audio Webcasts of high school sports in the Thumb area of Michigan. Thus Thumb Tailgater Sports was born and Chris Ogryski & Paul Adams were there pretty much every week for podcast pre-game shows that were exclusive only on Thumb Tailgater Sports.
Chris Ogryski did a story on Thumb Tailgater Sports on his own accord in the Huron County Press. He did it out of the love of our passion of high school sports and believed in what I was doing. Paul Adams also did the same thing in subtle ways in his column in the Huron Daily Tribune. (In the story it was mentioned that I would be doing play by play for WLEW this winter; that didn't pan out due to Thumb Tailgater Sports continuing into the winter sports season and hopefully many years.)
We became good friends because of sports. But were better friends in the things we also loved to talk about in life. Our families foremost and just about anything that "guys" like to talk about. So you can imagine what we would bring up when you hang out with your certain entourage. The friendship we have together I believe was and is growing every day. These guys made me a better sports reporter / broadcaster and most of all a better person.
Chris Ogryski's & Paul Adams family are also very forgiving for the time I took away on their days off or after a long day of work to do these special pre-game shows, that we would record in Chris's home. The shows usually were only about 1 1/2 to 2 hours, but we always spent four hours catching up and shooting the "breeze" about our lives and complaints...you know guy stuff. 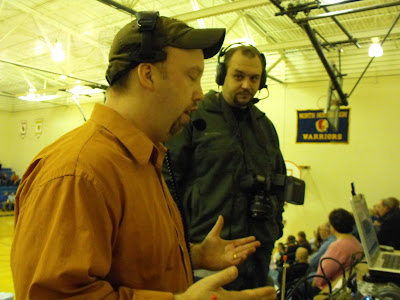 This Wednesday Night the "Original Thumb Tailgaters" will come together once again in Chris Ogryski's hometown of Ubly at the high school for the Harbor Beach Pirates versus the Ubly Bearcats boys basketball game. The pre-game show will start at 6:30pm and be broadcasted with a live internet audio webacast on Thumb Tailgater Sports.  Paul Adams and I will pay tribute to our friend, Chris Ogryski. I still can't believe that Chris is gone.
Chris is Paul's best friend, and I was honored to be invited in their circle of life and friendship. Not only did I lose a friend but so did the Thumb area.
Please pray for and may God Bless Chris Ogryski's wife and two daughters. Our love is with you.

My prayers go out to the Ogryski family. Chris will be sorely missed. Coach Dave Lester - Kingston